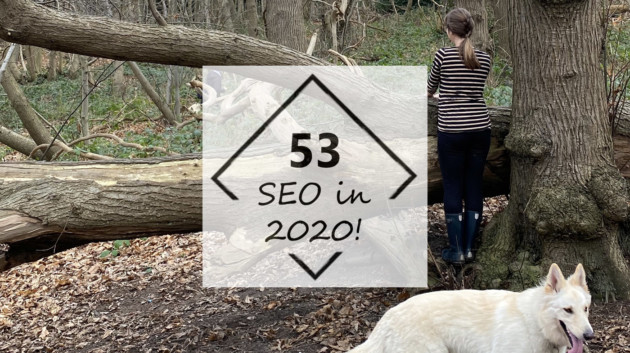 This episode is a roundup of what we can expect and what to look out for in 2020. Here’s what you should be spending your time on for SEO this year.

Ric Rodriguez, joins me. He is an SEO consultant at Yext, a tech company that structures information in a way that’s useful and intelligent. Ric has an agency background, including iProspect and Croud. Ric seemingly focuses his time on local SEO specifically.

Local SEO is based on optimising for locations and people in a particular area, finding stores and services online. This could be smaller businesses with a few locations or global companies with stores or offices around the world.

We’ve seen lots of changes with GMB in the past number of years. We can now post about our services and provide more information on opening times. We can also add imagery and use it similarly to a social media platform (RIP Google+.) It’s one of the best online marketing tools, says Ric. It’s free and you can define the information about your company and business, making it accurate, such as business opening hours and so on.

By adding posts on GMB you are offering more meaningful engagements and transactions on the platform with potential customers. Local search ads maybe the next step but engagement has already seen a huge growth. Ric recons we’ll see more G+ elements in this too. In my opinion, there’s that authority factor where brand is determined from engagements, photos and reviews (Greg Gifford is a local SEO pro you need to follow if interested.)

Google wants a future where they want to know things. They want to know what you’re looking for and what people want. For example BERT (Natural Language Understanding – Here’s the episode with Dawn Anderson, a huge expert in the field!) and processing and system around this. But Google also wants to offer more definitive results in search and that’s where things like instant answers and featured snippets come in.

Google wants to show the right ‘search feature’ at the right time for the right intent.

People can be trained to do something, ‘repetition epitomises’ and so Ric has seen how search engines are training people to look for information in new and improved ways. We’re constantly retrained to search in new ways and one big example is conversational search via voice search. Voice is a way to ask longer queries. Image search too, we have tags around it & image recognition developments; who knows, we may even see query-less interfaces in the future, like smart glasses.

Ric shares an analogy he learned from Punk Rock MBA, a channel talking about businesses behind the music industry. They mention bands that are so progressive and ahead of their time, that if they were 5 or 10 years later then it’s exactly what people would have wanted. Ric says that Google glass is exactly the same. He thinks they released it too early and believes it’ll make a comeback. Did you know it is still being used? Not commercially but nonetheless.

There was a stat that went around saying that 50% of searches will be via voice in 2020. I don’t think we’re there yet so I asked Ric how likely we’re to get there in the next couple of years. Ric explains that voice is definitely taking off. The BING voice report shows that there’s an increasing trend in usage (not just their own data.) By 2025 there should be hundreds of millions of devices being used compared to tens of millions currently which will spread this usage also. Also, with the growth of application of voice technology in other things, like cars, there’ll be undoubtedly a wider usage of voice search.

I personally think there has been a much quicker transition moving to use mobile from desktop (rather than normal queries to voice) and I can see that this was probably due to those devices that were being sold, such as mobile phones and tablets and as they got better, such as mobile speed, security, APPs etc. so did their usage. It has been a number of years already that traffic is higher from mobile traffic (ecommerce.)

Basically, voice is coming but it shouldn’t be the main focus in your SEO strategy in 2020.

Gary Illyes tweeted out that maybe in 2020 is the year where voice optimisation stops. Ric agreed with this because voice search and optimising for specific voice search results isn’t something you can optimise for. If someone asks a question and then the device asks ‘did it answer your question’ and they reply ‘no’ then you’ll never come up again… perhaps unfairly.

Instead, build the knowledge that you have in these systems and rather than having content that specifically answers those voice queries, gather data that’s useful to your user. This will transcend from just voice search and is actually good for across search types.

Web of Knowledge & Entity Based Search

Shoutouts to Bill Slawski and Dawn Anderson. Between them they cover information retrieval, scientific research documents on the web of knowledge and entity based search.

Search results historically used keyword based matching systems, links to order results, which perhaps also added context and so on, but this was up until search engines started providing direct answers in search. Information is more complicated rather than a page with relevant information.

Everything in the world is a thing and that thing can be described with other things that make it up. For example a football is made up of a certain material in particular shapes and then you play sport with it and so on. Search engines can provide more useful answers if they know the relationship between these things and so a collection of these articles/sites together is the idea of a knowledge graph. The web of knowledge is; the things that make them up and how they work together, for example a football, how it’s related to rugby, relates to sport and so on.

We’re already getting personalised information results via similar recommendation metrics like Netflix. This is super useful and if you’re interested in a particular topic, then why wouldn’t you be interested in the information that’ll be provided. Search engines will start getting better at understanding specifically what people want. We spoke a bit about BERT already, whether it’s based on words and contextual information (previous browsing history) but a lot of it is also related to entities. Search engines will need to know the associations between topics and things to be able to predict your next step and recommend the next element in your search.

Google themselves say that there’s no objective way to identify accuracy of some information. Google will determine the answer from contextual signals usually but in 2020 Ric suggests that there’ll be more focus on data, which will build knowledge. There’ll no doubt be an evolution of control of this data, as such can be seen with GMB. If you want to see what’s next then local SEO is the place to start as it is how it has worked for some time which helps feed better quality results.

You can expect Google to be testing the type of search results, more featured snippets, what people are searching for, what they want and the timings that they want it. Like Fili Wiese says, Google has the best feedback loop because thousands of people searching for similar sorts of things and so, they then can predict what you search for next and what they don’t like etc.

Structure data and schema markup is critically important for the future of search. It obviously helps feed instant answers and featured snippets but we’re likely to see even more structured data for different types of content and rich results.

Gianluca Fiorelli, in a MOZ article, talks about structured data to define context and information in search and how this will no doubt evolve further.

We need it to tell search engines what we do. We get the power to tell them exactly what our products and services are. But, more things will be definiable in terms of these values in 2020 no doubt.

There is a web development cost but there are no down side to using structured data really. It’s not subjective and it’s generally accepted as a good thing.

These will get more popular in my opinion and that’s automative tech basics, meta data creation, page creation with valuable information that stays the same and so on. Reporting is already a big one too.

Use Talk to Transformer website to see what kind of automations there are around currently. You can put in a couple of words or lines of text and it’ll write the rest for you. Ric had mixed experiences but interesting how this is an artificial intelligent starting point. Will this year see AI generated content at scale.

Youtube is owned by Google so it’s the 2nd largest search engine in the world.

Ric pretended he knew nothing about the internet and learned from there. Using YouTube and watching videos to understand the internet better he found high quality video and lots of content (he said he must have watched 60+ hours worth of footage.)

There has been lots of changes with TV, especially with Amazon buying licensing and sports channels. So, the video market is definitely expanding and for SEO too. Dan Petrovic (in a SEMrush webinar) recons that search engines will start understanding the content better and use it as part of their relevancy systems.

Video is also used in search results, which shows that people want a video for their questions/queries. Ric says that YouTube is also amazing for hospitality terms as there are walkthroughs of hotels and room tours. People want to see what these places actually look like and video is a great way to showcase this. YouTube is being used for things not just for entertainment but for tours/reviews of places and products. We’re likely to see this start being used in GMB too.

Search still has 5 processes that isn’t going to be more/less valid:

You must have all of this as it’s constantly, intrinsically important.

All the stuff that we as SEOs thought associated with ranking actually some of it is changing in terms of weighting. Structured data doesn’t help you rank better but helps you be understood better and makes you eligible to rank for what you do.

Think about what search engines are trying to achieve and then try and understand how they’re going to do that. Then – think about how YOU will be helping them to do that with your services and content.