27 | How to Prepare for Voice Search with John Brasington 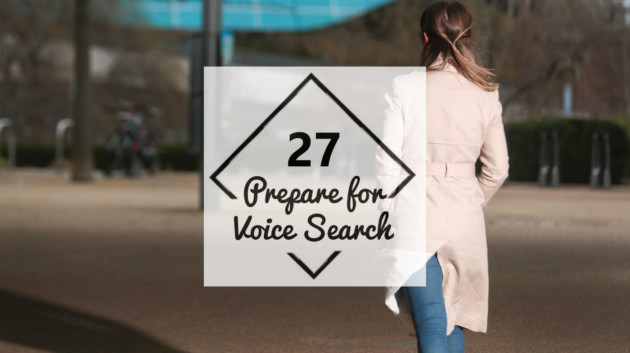 Voice search is still at this, ‘how is this thing going to work?’ stage. So, I’ve brought in a guest who has been doing lots of testing and experimenting around voice search.

John Brasington, Head of Search at Pi Datametrics, has a background in technical SEO but gets the freedom to do a lot of research at work.

John says that we’re still BETA testers for the voice devices and voice assistants. There’s a stat that says by 2020 50% of search will be voice so perhaps that’s when it’ll be high quality.

Voice has slowed down after an initial trend but we’re definitely getting closer. There will be a market that will grow but it’s not feasible to replace every query that we make. I don’t see us using voice on the tube but will do in the car due to the hands-free aspect. It’s more additional rather than replacing the other forms of searching.

We need trust in the functionality but also it needs to be a habit because at the moment people need to be reminded to use it. It may be a generational thing but it’s also convenience. For example, driving would mean over 17 year olds only and that’s not standard audience of the technology world that you’d assume.

At the moment, we rely on Google to get through day, at work and during lunch. It’s not a place for voice because it’s a time for private moments. At what points of the day would you use a voice device therefore and what would you query?

John therefore thinks that certain industries need to consider if there is a space there for you. For example, the news industry saw early uses of it via ‘morning briefings’ but a lot of people also consume news at lunch. Other industries should have a think about Alexa skills (and we’ll get into why later in this episode.)

Voice for Ecommerce: What powers Alexa searches
Ecommerce sites should think about ratings and reviews. Search queries for ‘what is the best X’ for example, a common query and something you’re likely to use with voice, seems to be powered by top trusted reviews in Bing and that’s pulled from a top listing to voice.

John says that he spotted that it’s NOT reviews from own sites, like Amazon, but rather other trusted review sites. Companies should therefore optimise better around reviews, such as understand where you’re listed and what customers are saying about you. Check that you are appearing in review sites at all even.

Bing is dominating the voice search market. Pay attention more to Bing as a search engine.

As a device, Alexa has done well because if you spent money on it to take it home, you’d want to use it more for sure.

Interestingly, Google has the advantage with voice assistant as the app reminds you to search via voice.

Consider: if you’re not performing well in mobile, it’s more likely you won’t be there for voice either.

Identify Search Queries
Google currently (2019) have no way to differentiate the queries. John Mueller may have not seen the point on Twitter but we do, so John identified these by looking at ‘filler’ words such ‘the’ and ‘I’ within ‘how do i’. They’re more conversational words.

Sit down and put together voice version of your ‘traditional’ searches / keywords, looking at the comparisons or changes but also if you have lots of keyword data, try and filter out by the filters mentioned above. You could already be ranking for voice queries!

Pi Datametrics are putting keywords into their tracking tool and saw the search volume increase significantly. Still small numbers are seen but it’s interesting to see the growth. Estate agents industry saw this trend which was unexpected, John says.

We still need to focus on what we know works but do keep an eye on voice queries, how the industry is shifting and what the growth of voice search volume is like.

If someone is in a shop and is doing a voice search, what would they see? John worked out how to emulate a location and see the difference for query results you receive when you’re at home vs Oxford street for example. He shares the types of things he has seen.

Testing: Could a price competitive option cause an invisible drop off in sales…

This is more likely to be voice when you’re in a changing room or when you’re walking around browsing. There is a growing relationship between in store and online, so to show crossover is very exciting. Only more to test!

Nick Wilsdon, spoke about Alexa Skills in episode 14, says that voice search will be more for services. The example he gave was Vodafone being able to remind people that they’re finishing their contract soon and so if the customer needs a new handset then prompt them to pop into store for a new one.

Paddy Powers mentioned the ‘chicken fingers moment’. What do you do when you’re cooking and can’t use your phone? You use voice. Think of it in the sense as something as adding a service or value that isn’t currently being met in a convenient enough way. If you’re making an Alexa skill, it’s about customers interacting with your brand but may be in a different way, such as serving a latest bill. It’s about positive brand experience and reminding people that their purchase from you was good.

Voice assistants talk back to us but then they’ll go away but the idea of them gaining your attention may be intrusive or invasive. Voice is growing like mobile search. Mobile is used more than desktop, outgrew the traditional method. So what should we expect with voice search?

John requests (and offers a tip) to say SHARE!

Test and share your tricks. This industry is great in supporting each other so do tweet out interesting things that you find to @mrsalinaghost.

SEO depends on the industry that you’re in, what works for you may not work for others so why not share anyway?

Speak to John Brasington directly on LinkedIn by searching his name.

58 | SEO for Startups and Small Businesses with Carolyn Lyden